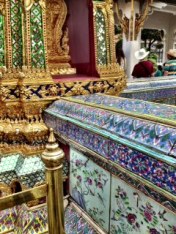 The pretty images above were all taken in Singapore, several years ago. Singapore is a lovely, orderly country where there is literally no crime or corruption, where people respect the laws of government and place a high value on history. Singaporeans exist peacefully with each other and their neighbors. The locale is heavenly, the food is fantastic, the architecture is stunning and the people are quite curious about America. The pictures were placed in this blog as eye-candy in hopes that you will read down to the following text.

But these days I am preoccupied with thoughts of destruction. I tried very hard to write something else today but I could not control my seething fingers. I have become so distracted, so preoccupied, almost oblivious to the memories of the way things used to be in our lives, before he was elected. All I see in my future is conflict. I am embarrassed and ashamed of my country for the poor choices we are allowing to be made for us and the new set of despicable values that have become the norm in Washington DC. We have lost our honor, America.

America, bless its ignorant heart, is killing itself. We have become suicidal.

I thought we had become better educated than this. I have become sadly preoccupied with watching America self-destruct as it unfolds in the daily news. There are not enough hours in the day for every single thing that needs our “powerless” attention and our hollow “hopes and prayers”. In a miniscule period, equal to one ten-millionth of the blink of an eye in  the universal scheme of Time, we have lost our democracy to an uninformed, poorly educated, narcissistic, sociopathic, immoral lunatic who takes sick delight in chaos and hatred.

Our fragile world is fish-tailing across time, bobbing and weaving under the pressure of the increasing number of internal negative elements whose common purpose is to take us to our knees and render us helpless to change anything. The path of destruction widens daily as new levels of insidious corruption and malfeasance reveal themselves. Things have always been dicey on this planet; no consistent certainty of which side is winning during the time of our existence. But now… these days, it seems clear that the good side is losing. Before I was preoccupied, I woke up optimistic about humanity. Now a disproportionate portion of my waking hours are spent in terror of what is unfolding right before my eyes.

I am ashamed of my government. It no longer stands for the greater good. It is infested with greed and corruption and hunger for power in epidemic proportions, destroying our foundation in methodical precision. As if by hoards of ravenous grasshoppers on a rampage, we are being chewed down and eaten alive by our elected officials, leaving a barren path of nothingness; devoured by politicians who are getting fat and sick on rage, revenge and the new Republican mantra of apathy toward the people who elected them. Do these people in Washington not have children and grandchildren? Where is their vision for the future? What sense of responsibility do they have, other than to their own egos? For all this their dark legacy will be remembered; they are the destruction-ists.

If you are a person who cannot see it, you are more than just blind; you are self-absorbed, in denial, numb to the truth, ignorant of past history or too lazy to care. You are not preoccupied enough with the current state of affairs. You must fortify your courage and read about this phenomenon. You must be informed. You need to know what we are losing on a daily basis and define just what it is that you personally believe is worth fighting for, not abstractly but in the bloody trenches. Do not remain blind, deaf and dumb to history being made in the daily decisions of ignorant fools.

Major accomplishments that have taken decades to put in place are being vaporized right before our eyes. Not only basic human rights and privileges for every human being, but environmental protections critical to our planet’s survival. Water and air are becoming more and more contaminated but clean water and fresh air are no longer considered a basic human right. Education loses and guns win. Poverty and hunger remain as ostentatious military parades are planned. Parks and national treasures are being destroyed and dismantled for the sake of more oil and minerals. Walls are built and fear is mandated. Does this sound like it could be a description of North Korea or Russia?  Germany during WW II? Hell yes it does, but it is happening here in America.

It would not be an exaggeration to say that a handful of treacherous men and women in high places have taken it upon themselves to promote, follow and enable a warped and perverted leader in the process of accomplishing his murderous agenda.

How can we allow this to happen?

What is wrong with us?

Must we allow everything to be torn down in order to see the light again?

History is always our teacher; nothing good can come from this. 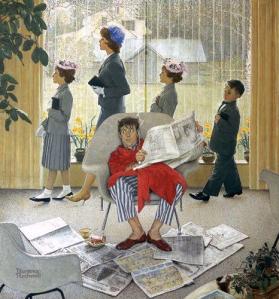 For many people I know Sunday mornings are special. Sundays mean various things to various people but without fail they are different than any other day of the week. It is not a religious thing to which I am referring, although certainly that is an important component of many people’s Sunday mornings, but for me Sunday mornings do seem very much a spiritual thing. A loosely structured ritual, worshiping a way of life. It is a renewal of sorts – a chance to catch up on a little sleep, a chance to linger in bed which is a treat in the coldness of a winter morning, listening to the quiet sounds outside your window. You might decide to turn on TV and watch SUNDAY MORNING with Charles Osgood, a lovely program that always feeds my soul with stories of art, literature, film, food, music and other uplifting information. It renews my appreciation of creativity and often I am inspired to paint the afternoon away after watching it, or go see a film that has been discussed.

Scrambled eggs, bacon, toast and jelly – or maybe blueberry pancakes and syrup – the kitchen comes alive and the smells are better than any other morning of the week. You allow yourself time to enjoy it, reading the paper, maybe you stay in your PJ’s until noon. Football! Ahhh – what will we have for snacks during the game? The Broncos come on at 2:25 against the Chiefs! Nachos? Burgers? A big hearty pot of chili with all the toppings? Brownies and ice cream for desert…who can we call to see if they want to come over and watch the game? We can have a pre-game football game out in the yard so tell them to get ready for that and dress warm. If it snows we’ll go sledding instead.

In my mind, since I speak the language of art, I always visualize Sundays as Norman Rockwell occasions. For me, that fine gentleman artist whose illustrations graced the covers of the  SATURDAY EVENING POST magazine captured the essence of how we live, what we do, what occupies our thoughts and what things warm our hearts. He was a true American artist who chronicled our lives in realistic, emotional images that will live forever. I have at times lived a Norman Rockwell kind of life – difficult to sustain but never the less do-able at certain moments in time. Memories are made of this, as the song goes. Sundays are for the best of friends and family. When I count life’s blessings, I will always remember Sunday mornings and the people I spent the best ones with. You all know who you are.