I am gone – I left the island in the dead of night with a stiff breeze behind me, embarrassed almost to be leaving because who in their right mind would leave, and flew back to northern Cal. I didn’t really want to leave and my dread of the long night ahead of me on the plane was punctuated when the person next to me spilled a full glass of tomato juice all over my carry-on.  I took it as an omen that I was going to hate the trip home. I really didn’t want to leave, or did I already say that. The island life is alluring, delicious, sensual, colorful and it grows on you. You roll around in the ambience, like a dog on a good smell, wanting to get it permanently into your pores. It is sensory overload 24/7. I wanted to really be there – not just visiting. I met a lot of new people who I already believe will be friends, I painted, I wrote and I thought a lot. We took day trips, we went to street fairs and markets, we visited art galleries and many beaches.  I took about 7 million pictures and told myself I was absolutely allowed to stand there on my beach of choice for over an hour if I wanted to, attempting to capture the perfect wave in one magnificent photo.

But now, as the James Taylor song says, “Say nice things about me – cuz I’m gone.”

The seduction of color hits you at every turn in Hawaii. Those of us who are hooked on it, who must have our daily fix, who lap it up and eat it whole with juice dripping down our cheeks as we photograph it, who live and breathe it and cannot possibly get enough of our junkie habit, our COLOR drug of choice, well we are happy as hell on the islands.

The paintings I finished over there in lala land were like alien creations – colorful, wild and a little bit too free even for me. Like craft day in the loony bin. Kind of mindless and silly with metaphorical smiles. Abstract to be sure, and I know it was my hand that painted them because I watched it happen, but somewhere along the way they went all goofy and the color became almost the only thing. It was fun while it lasted, however. I worked fast while held in the zany clutches of some island gremlin and lost my common sense as I flung the paint around. I guess that would be called painting with abandon. A good thing, really, to be able to unleash that inner 3 year old and give her an afternoon purely for her enjoyment. She got her wiggles out.

But she grew up fast on the ride home when that tomato juice hit the fan. It seemed symbolically rude. Like a smack in the face that said, “Ha Ha, nanny nanny foo foo – you have to go home now.”

And so I did – I took my toys and went home.

Wow is it drab here at home in the middle of February. When I returned from the island, the barefoot confetti life gave way to the black frost bitten gerbera daisies in the pots around the patio. Spring is still a way off here.

But I have pictures to prove the validity of paradise and what it does to you. Wanna see some?

And don’t you know when the cold wind blows it’ll turn your head around.  55 degrees seems like freezing as I leave baggage claim and load my stuff into a friend’s car for the drive back to Lincoln.

Was that place a dream?

There is a certain charm in painting away from home “on location” as they say – remotely – in a studio not your own. It is liberating – everything’s arranged differently and it forces you to leave your routine behind and get loose. Where’s the paper towels? Do you have a squeegee? How about some light blue violet? The light is best at this window except the ants are crawling across my canvas.

The locale offers you new colors to consider, new views, new sunsets and exotic fruit. That is all true and on steroids here in Hawaii. The visual display begins with breakfast and continues throughout the day – kinda makes you want to take notes, and you do – mental color notes. You wish you had more paint. You wish you had more time. You wish.
Purples with sunset orange, pineapple, lime, papaya, mango – all translatable into colors splashed on canvas. Juicey and delicious.

To have two paintings completed before lunch seems ridiculous. That just never happens at home. To be certain that they are truly finished by mid afternoon is crazy fun. To see colors flowing from some resource you had no idea you could use, as if channeling the island ambience just for yourself, is a delightful discovery. Being away is an epiphany.

So many waves, so little time. Waves of joy, waves of happiness, waves of nostalgia – we can hear the surf pounding as we lay in bed at night. Reports of high waves and strong surf over on the Hilo side. Here along the Kona coast the sand at Magic Sands resort beach just down the road was eroded away with big wave action a couple weeks ago leaving the magic to stand on its own but now the sand is already coming back. It has to come back – for eons of time it has weathered enormous surf and it is still there. It figures out how to come back.

Humpback whales migrating parallel to the waves with their babies on their way to some far off destination where plentiful food and safety for their young can be found. Traveling close to the coast to avoid ships and sharks, stopping in this cove or that to allow play time in warm waters. The whale watching boats are busy – I have a thing about chasing whales. Not a yearning to do it but a yearning to just leave them alone. We see whales from this lanai, not up close and personal but we do see them. You hear stories about crowds of people squealing with glee at seeing a whale up so close you can look him in the eye, and yet I prefer not to participate in that group grope. It offends my sensibilites, and I identify more with the whales than the people.

The waves, as I sit here on the lanai writing as the artist I am, are a shade of Prussian blue with streaks of cerulean that lasts most of the morning, then becoming different depending on the afternoon weather of course. When they roll into shore you see that coke bottle green under the white froth of the curl. It is constantly entertaining; a whole day can slip away watching the waves as the day unfolds.

All the water that has ever been is still here and there will be no more. The water that flowed when earth’s time first began is here, the water that enabled life. We drink it now. The tears of Ceasar, the water that bathed Michelangelo, the liquid that quenched the thirst of many a tired traveler across mountain and prairie, the water that sailed ships and cleansed uncountable wounds. The story of mankind is in the water. 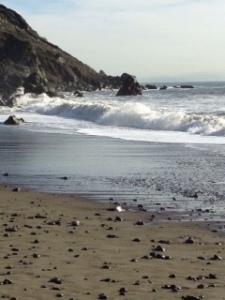 In the mindless afternoon of ocean gazing such thoughts come to mind.
In a wave’s length.

I am away. I love being away. This time I am on the Big Island of Hawaii, along the Kona coast visiting a dear friend.
The view from my transplanted office here on the upper lanai is spectacular – my “specific ocean” as I like to call it, displayed before me through breaks in the palm trees, changes color as the day progresses. Cerulean, Prussian, Pthalo, Ultramarine, Azure, and the default oldy but goody – turquiose. Those are the blues of my world.

Yesterday we drove to a small cove farther south, joining friends for a beach pot luck dinner, an “every Wednesday evening” kind of tradition for them. They say it breaks up the week, keeps them in touch and provides visual feasts for the eye – reminding them of the pleasures of living on the Big Island. The food was special – everyone throws something on the grill and then it is all sliced and placed on a platter so that everyone can sample every single delight. Tenderloin, chicken, sausage, Ahi, hot dogs and pork. As one of the guys played his guitar and some sang we quenched our thirst and devoured the gourmet foods, topping it all off with red velvet cake.

But without question the late afternoon show, happening before our eyes in several rings of the circus in Ki’ilae Bay, were the whales! Mothers and newish babies blowing their baby blowhole spouts, larger big boys displaying the classic whale tale shot for our entertainment and delight. Over and over it went, and just as the fireball shone its last light of shimmering gold over the water before it dipped into the sea, the biggest whale, positioned dead center in front of the sun, took a final dive flipping his tail for the adoring crowds.

Did I manage to get a picture of that fleeting moment? No. But it is forever etched in my mind. Some day when I am bored, or maybe a night when I cannot sleep, or perhaps I am just wanting to scroll through the mental camera roll documenting the most memorable moments of my life, I will remember yesterday, being away at dusk along the Kona coast.

There is an especially large old oak tree down by the wetlands area near where I live. This tree towers above all others. In the “winter” months here in northern California’s rolling foothills of the Sierras, there is no real snow – you have to drive up the 80 about 40 miles on your way to Tahoe for the snow possibilites to begin. Here we welcome the rains of winter, and this year they have been scarce. The leaves of this majestic tree are still gone and you can see the enormous nests of the Blue Herons who reside there in the summer months. The nests look like they are about 4 ft across, and they are tangled up in the highest branches. The Herons have already returned, here at the onset of February, and one of these days I will get a photo when the light is right. By the time they get to their nests every evening it is almost dark and hard to see them. They have been out earning a living during the day, just like everyone else. But picture a half dozen gigantic birds, each probably 6 ft tall, standing in his/her nest in this mother of an oak tree, watching over the Safeway parking lot, the Starbucks, the Cleaners, the bank and the Jack-in-the-Box. There is plenty of traffic going on all day and night in that area. They seem fascinated by it. Not a one of them is pointed in the other direction.

Even in the low light of evening you can see they are blue – navy blue. They look as if they are dressed in gangster suits, all sraight up tall and somber. Motionless. Beady eyes watching. You kind of imagine them in dark sunglasses and an Al Capone type hat, brim turned down just right. And some Blues Brothers music.

A regular customer at our Starbucks here in Lincoln, CA, often parked between a Smart Car and a motorcycle, but today going solo in the late afternoon.
photo taken yesterday, 1/31/2013