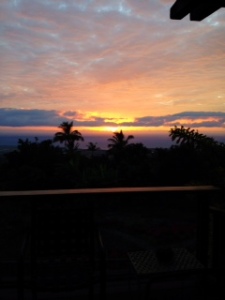 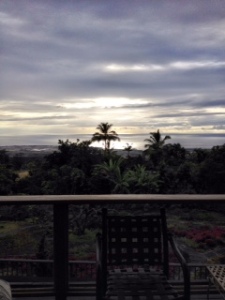 A selection of sunsets for your viewing pleasure, Kona HI

So during my recent stay on the Big Island, drinking sunset wine on the western deck at 1000 ft elevation, with the Specific Ocean spread out before us like glass, and well into the prime time viewing portion of a dazzling, colorful display in shades of pewter, silver, steel blue and iridescent gold underneath the warm colors of sister sun…we are feeling no pain and talking about birds.

Birds are plentiful there – squawking and screeching and calling to eachother for answers to the big bird questions. It begins about 4:30 or 5 am and continues with different groups and choruses all day long until dusk. Since lots of chickens roam the island in the epitome of the much sought after free-range chicken life, you are liable to have roosters nearby who of course signal the dawn in big COCKA DOODLE DAMN DOOOOO (I am awake now and so are you) announcements every single morning – the good news is the free-range part because eventually they move on to greener pastures and bigger bugs to eat.

And there are crows. Remember that all these birds first breezed into the island at some point in a very ancient time, either purposely or riding involuntarily on the prevailing winds or perhaps a storm that they could not get out of, like being in a giant washing machine headed somewhere. I am fascinated – glued – to James Michener’s thick, almost 1000 page classic book “Hawaii”. I got it when I came back to the mainland and can’t put it down. Well sometimes I have to put it down because it weighs too much to carry around all day. At the time of the Roman Empire and Christ the islands were still being formed by volcanic activity and did not yet exist as a habitable location….they were forming, becoming a potential paradise, but still without edible food and clear water. The Big Island of Hawaii and her smaller sisters had not even come close to being discovered or habituated by a human person. Think about that, and think about the first people arriving and how amazed they were….but I digress.

Birds are usually found in groups which are not always called flocks, and while sitting on the deck we googled bird info and the names of various bird groups. Here is what we found, and we could not stop reading, while opening another bottle of wine.

A bunch of Crows is actually called a MURDER. Then we also have : Teams of Ducks. A Mob of Emus. An Ostentation of Peacocks! A Pitying of Turtledoves…. A Cast of Hawks. A Wedge of Geese (while they are flying). A Siege of Cranes. A Herd od Swans. A Charm of Hummingbirds. A Company  of Parrots. A Conspiracy of Ravens. An Exaltation of Larks. A Parliament of Owls. A Tiding of Magpies. A Scold of Jays.

Well it got funnier and funnier. You had to be there ( we wish for you that you were…). We also made up some of our own – well of course we did. It was sunset in paradise and we had the time.

There are many more to be found if you follow this link to the Palomar Audubon Society page: http://palomaraudubon.org/collective.html

Open a bottle of wine and watch the sunset wherever you are.