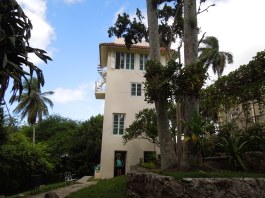 For weeks since returning from our trip to Cuba I have been agonizing over how to do justice to the Ernest Hemingway experience. This cold Sunday morning as I mindlessly began to paint an abstract composition while listening to the music of the Buena Vista Social Club, one art began to feed the other. I begin to write about Hemingway in my mind as I painted. Ten minutes in I drop the brush and move to my computer, where the calling was loudest.

I had been stuck, because I knew that there was no way I could ever do justice to the man. I like to think of myself as a (somewhat puny) writer, having published three books of my humble thoughts. I know something of the torturous endeavor of letting the words bleed out in a steady stream all the while wondering if anyone on earth will care. Hemingway is one of my idols; he was the master of the short, declarative sentence and the raw brutality of the honest word. He was the “no frills” genius. For that reason and many others his words have remained relevant; his prominence has not faded, his presence in Cuba is still palpable. You hear his name everywhere.

Oddly enough, the following quote from John Donne which provided the title for Hemingway’s war novel For Whom The Bell Tolls is eerily relevant in today’s volatile political climate. Hemingway decided to include it on the page that precedes Chapter One of that war novel.

“No man is an Island, intire of it selfe; every man is a peece of the Continent, a part of the maine; if a Clod bee washed away by the Sea, Europe is the lesse, as well as if a Promontorie were, as well as if a Mannor of thy friends or of thin owne were; any mans death diminishes me, because I am involved in Mankinde; And therefore never send to know for whom the bell tolls; It tolls for thee.

John Donne 1572-1631 English poet and cleric of the Church of England.

Hemingway was born in Oak Park, Illinois in 1899. While volunteering in the infantry during WWI he was wounded and sent home. By 1921 he was living in Paris and became one of the expat community of writers there, including Gertrude Stein, F. Scott Fitzgerald and others who would become prominent writers of that time and all time. In the 1930’s Hemingway settled in Cuba and the mutual love affair with that island nation began, but he still traveled extensively to Spain, Italy and Africa. His reports on the Spanish Civil War led to his highly acclaimed war novel For Whom The Bell Tolls (1939). His novel The Old Man And The Sea, probably his most popular work was awarded the Pulitzer Prize in 1953, and in 1954 Hemingway won the Nobel Prize in Literature for his powerful mastery of the art of narration.

He wrote seven books while living in Cuba including The Old Man And The Sea, A Moveable Feast and Islands In The Stream. He was the only American with permission to conduct patrols off the coast of Cuba, hunting German submarines in his fishing boat with a machine gun and hand grenades. Hemingway met Fidel Castro at his own fishing tournament ( The Ernest Hemingway International Billfishing Tournament which is still ongoing, in its 65th year) and there are photographs everywhere in Cuba of Castro and Hemingway at that event. One of Hemingway’s favorite “watering holes”, La Floridita, is still a wild and crazy, thriving bar and restaurant which I heartily recommend that you visit in Havana when you go to Cuba – and you must go to Cuba. There is a life-sized bronze bust of Hemingway there, planted forever in his favorite spot in the corner of the bar so he can watch who comes through the door, and you can have your picture taken with him. Sort of. Next best thing. Yes I did.

His tropical home in Cuba, the Finca Vigia, (Lookout Farm) is a magical place with lush grounds and far vistas – he was often photographed there with prominent friends and film stars partying down the path at the pool, and his boat “Pilar” is there also. The rooms are fascinating, frozen in time; we were only permitted to look through the windows to his interior world. It is now a national treasure, which we visited and where my photographs were taken. In his bathroom, on the wall next to the toilet and the scales, are periodic scribblings made by Hemingway, recording his weight over a long time. All of his personal belongings and collections including one of his many typewriters are there. His main typewriter is located in an adjacent white stucco “writing” tower which his wife had constructed for him but which he really did not like to use for writing. From the looks of it, he spent more time using the gigantic telescope there. All of his honored belongings are still exactly where he left them; never knowing that his hasty departure was going to be permanent. Because as much as the Cuban people loved and admired Ernest Hemingway and claimed him as one of their own, during the 1959 Revolution in Cuba Hemingway was forced by the powers that be (Castro) to leave the country. This exit, this deportation, was a source of profound sadness for him, and shortly after he returned to his home in Idaho (1960) he took his own life.

There is also a modest room that he called his own in Hotel Ambos Mundos in Havana where he stayed while in the city, complete with his own desk and another typewriter, with nice views of the water and the old castle fortress from the balcony. It is certainly worthy of your time if you cannot make it to his country home. It is open most days – the door will be locked, but be sure to knock – someone is always inside watching over things.

There might be more about Ernest Hemingway – one little blog is hardly going to do it.