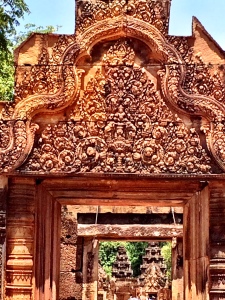 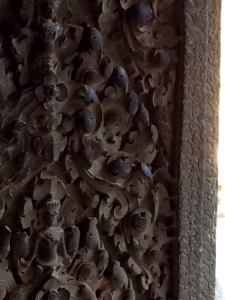 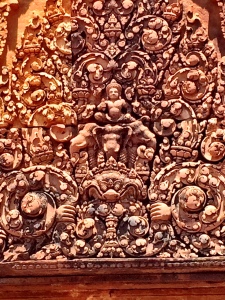 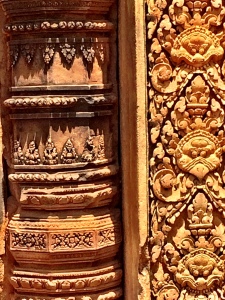 If you get off on color, pattern and texture as do I in my mixed media collage artwork and my contemporary abstracts, well then Angkor Wat can offer you a plentiful selection of all three of those as well as inspiration for color ideas ranging from weathered reds to terra cottas, burnt siennas and other shades of orange – originally all the structures were painted. The very high relief of the sandstone sculpture is astounding and reflects the sophistication of each temple’s design preferences. Simple carvings remained lower to the ground, for easy access by the common people; carvings increased in complexity the higher they got on the temple wall with the simple fact that it took more educated people who lived in the upper chambers to read them. To complicate matters, speaking in terms of art history, the historically Hindu Angkor Wat includes an invasion of Buddhists who breezed onto the scene sometime around the 14th or 15th century and proceeded to conquer and destroy all Hindu references to the Hindu god Vishnu! Modifying (smashing) the faces, headdresses, leg positions and arm placement of seated figures and transforming them to Buddhist! It is an abomination – and a horrible attempt – clearly an obvious and disgusting falsification of important art, and Angkor Wat remains Buddhist to the present day. One can easily see with the naked eye the areas where these uncharacteristically violent Buddhist changes were made in the carvings.