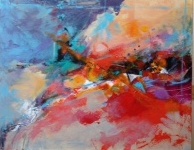 Before – some gray wash added in the lower area 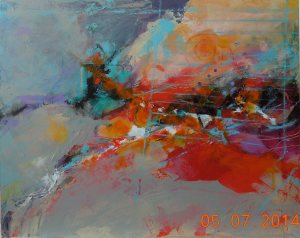 After  – more gray wash and the big gutsy move, copyright 2014

My relationship with the Year Long Canvas (YLC) continues, and she has a mind of her own…so when she speaks to me I listen.

Monday’s class was rather different and fascinating for me.  At the suggestion of my instructor, Homare Ikeda, I reluctantly covered a large portion of the lower portion of the painting with a gray wash. He loves gray washes – he uses them a lot in his own work. In the hallway outside our classroom is hanging about a 4ft x 4 ft Ikeda painting, and there is a large gray square area in the middle of the painting that dominates – obviously at some point he thought the painting would look better and work better and be more balanced if he grayed-out this portion of the composition. I cannot show you a picture of it because I would be violating his copyright, but the remainder of the painting is busy – complicated and playful – with zigzags, polka dots, squiggles and other childlike gestures done in various colors of paint. The gray area is not the focal point – it throws the emphasis to all the outside areas of the painting which are the focal point. Very unorthodox, to do that – but that is typical Homare Ikeda. That is precisely why he is who he is. See his paintings at http://www.homareikeda.com

So, we agreed it was time to simplify, and what has become the focal point and/or the STRENGTH of the painting (the multi-colored busy-ness in the middle area of the right side of the painting) is NOT the place to do that, so it seemed logical to use the wash right where I used it. Painting is often a series of additions and subtractions – you try something on the canvas and either it enhances the painting or it does not. And it might enhance the painting during many hours of work sessions and then suddenly when you do some specific thing to the other parts of the painting, everything changes and the area you enhanced no longer enhances. After cautiously spreading the gray wash over the bottom, I liked it – it made everything else stand out by comparison and it concentrated all the action more effectively on the focal point. So I continued the gray wash farther up the left area of the canvas, covering up even a larger percentage of the canvas with it. The purplish-blue in the upper left was grayed as well. Then I decided I liked the  path of stark white so I whitened it up even more – taking it more prominently from lower left across and over toward the mid-right, which gave the focal area more punch, because the white contrasted so nicely with all the bright colors there.

I was surprising myself – I was going forward with something I thought I would not really like and finding out it made everything better. Gray is not a fav color of mine, but it did what it was supposed to do because it is so neutral. The advantage of gray is that it does not conflict with much. It is merely gray.

So while I was on a roll I decided to create a sort of something-or-other to look THROUGH, right on top and over the surface of the focal point, as if you are seeing all that focal point action behind it  – and instead of doing an obvious window with a square-ish frame I decided to do a series of slanted parallel lines almost suggestive of venetian blinds, right over the top of the focal point – the reason being to give it more importance! Anyone viewing the painting would feel that they were seeing through the lines to a special scene or image – and since it already had a round sort of blurred fried egg shape like a sun, perhaps I was suggesting that the view was of a landscape with a colorful hillside village underneath the sun, seen from behind open venetian  shades. I thought it might give the painting a quirky twist – a mysterious turn of events.

Well it seemed a risk worth talking, so I used turquoise lines in a non-square-ish, somewhat distorted way, and I drew them right on top of my focal point. YIKES YIKES YIKES I kept thinking as I did it – this is either going to be great or it is soooo not going to be great.

When I showed it to Homare he was very, very pleased – big smile. And my work for the day was done.

I would so love to leave the YLC this way and call her done….I would title her “Seeing Puerto Vallarta” …… but that is not the challenge, is it?